Here's another  interesting piece of information from the recent Windows developer survey sponsored by Embarcadero. 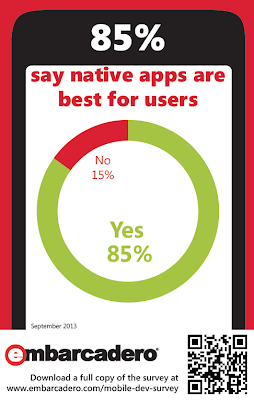 Software developers surveyed overwhelmingly said that native apps are a better choice than scripting language based apps. RAD Studio and Delphi users know that with the new XE5 versions, they can create true native, script-free apps for both Android and iOS while leveraging their Windows development skills and code.

A global survey sponsored by Embarcadero, finds that while a majority of Windows developers are experiencing great demand for mobile development, the actual delivery of these apps is being compromised due to the cost and complexity associated with supporting multiple platforms.

The survey, conducted by Dimensional Research and comprised of 1,337 Windows developers from around the world, reveals a clear disconnect between the growing interest in mobile apps and the lack of tools available to actually develop them.

Just, Delphi iOS and Android apps are not "native" apps. They may run some native code (but in Android, Dalvik code *is* native code), but they have not a native UI, just an imitation of that. In Windows, if the VCL had targetted the Native API, and not the Win32 subsystem built atop it, would application have been "native"?
I'm sorry, the only true "native" applications Delphi can make are the Windows one - and sometimes there are issues even there.
Embarcadero should not try to deceive developers. Sell what you have, it could be useful or not for a developer, but don't try to sell what you don't have.Embarcadero has no full *native* solution nor for Android nor for iOS nor for OSX. Naive developers would discover it soon, and deceiving customers is never a good way to sell stuff.