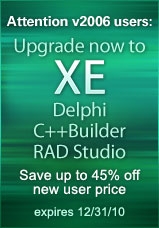 Upgrade pricing for Delphi 2006 and Borland Developer Studio 2006 (BDS 2006) users is only available until December 31, 2010. If you're still using version 2006, this is your last chance to get upgrade pricing to Delphi XE, C++Builder XE or RAD Studio XE.

Starting January 1, 2011, registered 2006 users who haven't purchased a later version will have to pay the full new user price to move to version XE or any newer version in the future.

Now is the best time to upgrade to get upgrade pricing before time runs out and get the bonus of an extra tool free with the Buy One Tool, Get Another Tool Free promotion that also ends December 31st. Check out the Embarcadero "Where to Buy" page for all your choices for buying Delphi XE, C++Builder XE and RAD Studio XE.

I will prefer to stay with Turbo 2006 and buy VS2010 using russian promo price. There are no sense to pay more for allmost the same package with same bugs, issues, etc. Previously I consider upgrade to D2011 with 64 bit support but now for me cheaper to still use D2006 (all works fine with Windows 7) and create new version of product with VS2010.

I would recommend to wait for the 64 bit support or at least cross platform before taking any upgrades into consideration — Delphi developers are waiting for this since forever, it's about freaking time!!
http://www.delphigeist.com

I'm not sure whether EMBA knows the other side of this coin ...

Developers are moving to .NET and c# as if it is the natural upgrade from Delphi. And for those who wants to try C# before making the decision, Microsoft has their Express editions which is almost as good as Delphi Professional (feature-wise).

Bad move! They didn't convince me to upgrade with the product itself, so they will force me to upgrade doing this? The price of Delphi here in Brazil is already exorbitant, so it will get just "a little more". Good luck with this upgrade policy.

So for Ukraine upgrade price is US $600. MS Visual Studio Pro costs US $ 900. Also it is possible to join Microsoft BizSpark. So for old clients Turbo 2006 will be maintained (no issues with Windows 7 32 and 64) while new one will get products based on .NET solutions and Firebird. I've make even small helpers now on .NET - it is quicker and simpler. So good luck Embarcadero - you will not even get a old user back with such policy. Once I've get .NET sources - I will not go back. Sorry :(