Update 1 for Delphi XE and C++Builder XE is now available. It's available first via the auto update system. If you have Delphi XE, C++Builder XE or RAD Studio XE installed, you should see a prompt like this to install the update.

You can also get to it from the Windows Start Menu by running "Check for Updates" in the Embarcadero RAD Studio XE group. 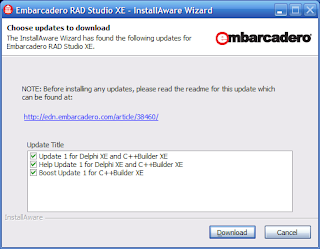 See the Update 1 Readme for more information in English, German, French, or Japanese.

The fix list for Update 1 is available on EDN.

The update will also be available soon on the registered user download pages for Delphi, C++Builder and RAD Studio.

Updated versions of the full installers and ISO should be available to new users, trial downloaders and All-Access customers next week.

If you're one of those people who doesn't like to upgrade to the new version until after the first update is released, your wait is over.